She explores different aspects of everyday life by recreating situations based on her observations. Often she mixes characteristics of different individuals, filtering them down to what she perceives as the ‘essence’ of those living in a post-communist society. Szabó sees the infantile characters featured in her work as the cause and result of a paternal, controlling government. In a post-communist country, powerful residues of the past continue to deeply affect the everyday lives of its citizens. In Dispenser of Delights she manipulates real estate advertisements, which she populates with her imaginary characters. Szabó creates an accurate portrait of everyday people through re-animations of archetypal figures.

Eszter Szabó (1978, HU) is a painter and video artist based in Budapest (HU) and Lille (FR). She graduated from the Hungarian University of Fine Arts in 2006 and is currently completing her postgraduate studies at Le Fresnoy, France. In 2010 she won the Derkovits Scholarship, a grant for emerging artists in Hungary. 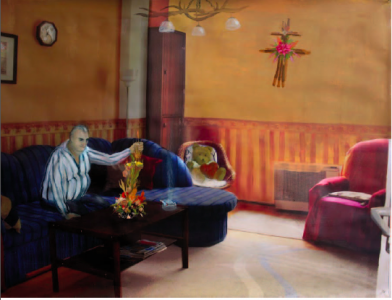