The fantastic and schizophrenic images created by Boris Pramatarov follow the pattern of horror. They appeal to the viewers’ emotions and tickle their feelings of fear and repugnance. He is fascinated by the “doppelgänger”, who is not just a fantastic figure, he is the possible other – the one next to us, beyond the path, in another country, on a different continent or planet, whom we not always know so we imagine him evil and demonic. Meanwhile, however, the twin is the other one inside of us, our “different”, hidden, side. As if reminding us of the “folklore” and the fantastic tales, the works of Boris Pramatarov raise viewers’ attentiveness to themselves and their own (sub)consciousness.

Boris Pramatarov (1989) was born in Sofia, Bulgaria. He graduated in Book and Graphic Design at the Bulgarian National Academy of Art and specialized in Illustration at the Hogeschool voor Wetenschap and Kunst, Sint-Lucas Beeldende Kunst, Gent, Belgium and Duksung Women’s University, Seoul, South Korea. Finalist of the 2010-2011 Raymond Leblanc Award, with the comic project “Eloge à l’Internet”, he participated in the group album of the top five (edited by Lombard Publishers) and in the exhibition of the finalists at Moof Museum, Brussels, Belgium (September 2011-March 2012). 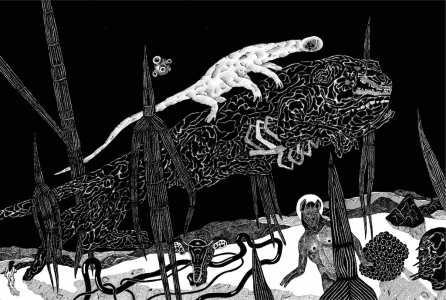