Anca Benera and Arnold Estefan’s Jus Soli video documented performance (2013) is an attempt to unravel the complexity of national identity, by literally unraveling the flags of their native Romania, as well as their respective ethnicities.The long and painstaking process, which took several weeks, resulted in a ball of thread with no identifiable features according to national or ethnic lines. The flag, the national symbol, is reduced here to the transitory state of a raw material. Instead of placing national identity on a pedestal, as is often practiced in inter-ethnic or international conflicts, the artists demystify the concept, unspinning the tightly wound belief systems.

The work of Anca Benera (Romanian) and Arnold Estefan (ethnic Hungarian from Transylvania) deals directly with the issue of cultural difference, exploring the caustic imprints on subjectivity of identity, history-writing and law-making.Their practice spans different media, cultural registers and disciplines to reflect on society as being a tissue of conventions that can and must be permanently re-imagined. 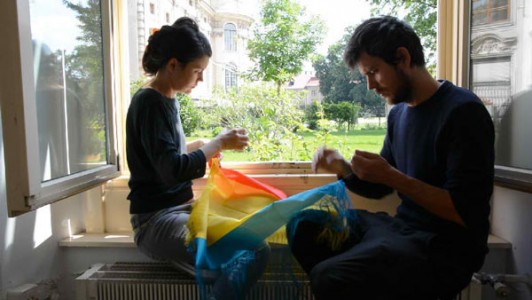