The construction sector, which used to employ over 70.000 foreign workers in Slovenia, collapsed in the period between 2010 and 2011, leaving behind debts, a suspension of construction activity, and exploited, unpaid workers. The majority of the employed workers came from the geographical regions of the former common country. While the state silently observed the oppressed, underpaid, unpaid and humiliated workers, we witnessed an accumulation of wealth on one side, but also of exasperation and resistance on the other. As the competent national authorities, mass media and the general public failed to react, the self-organization of workers was inevitable. They demanded better living conditions, payment of unpaid wages, equal opportunities, etc. Armin, Aigul and Esad take us through their particular stories and specific areas of work (activism and construction), which become generic and universal.

Nika Autor  works in the field of contemporary art. She finished her studies at the Academy of Fine Arts in Ljubljana. The focus of her work is a research of the invisibilities/ inaudibilities, along that the question of the production of dominant representations, which are emerging on today’s social, political and economical grounds.  She is part if the collective Newsreel Front ( Obzorniška Fronta / OF ). Her work has been presented in different galleries and festivals; Film d’actualites- l’actu est a nous /Jeu de Paume, Paris, France; Between Worlds II, Gallery Miroslav Kraljevič, Zagreb, Croatia; U3, 7th Triennial of Contemporary Art in Slovenia, Ljubljana; Shifts in Time: Performing the Chronic, Mumok, Vienna, Austria; Alternative film/video, Festival novog filma i videa, Beograd, Serbia. 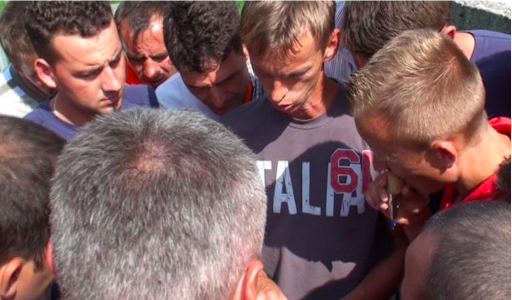