Martina Grlić belongs to a new stream of Croatian painting, which focuses on the figurative in art and on the narrative potential of painting. Her body of work is a critical reflection on the changes that took place, and are in fact still happening in the post-socialist societies. The Factory cycle highlights the figure of the working man, which occupied a heroic position within the socialist mythology, but became increasingly marginalized during the transitional period. It seems that factories still exist only in the memory and in old photographs – the two elements were connected by Grlić in the cycle Factory by using interior shots of some of the legendary Croatian factories such as Podravka, Jadran, Jugoplastika etc., and their workers.

Martina Grlić (1982, CR) graduated in 2009 at the Academy of Fine Arts – Painting Department in Zagreb. She has exhibited since 2008 in Croatia and abroad and is one of the most prominent young-generation Croatian visual artists. In 2012 she was awarded the Erste Grand Prix for best painting. Lives and works in zagreb. 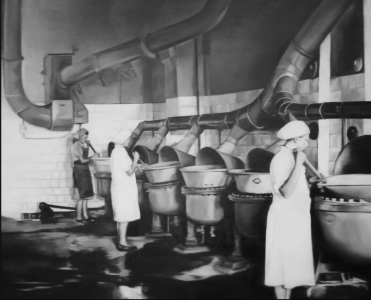