The color-reduced, minimalist visual language of Stojan Knežević skillfully captures the dismal atmosphere that is becoming increasingly characteristic of the second decade of the 21st century. The author’s cogent use of cheap materials – carton and cardboard, corresponds to the depleted painting expression and creates a sharp contrast against the motifs of suburban comfort displayed in his works. Knežević’s painting pronounces a subtle criticism of cultural poverty – both in the sense of rich people lacking the proper attitude towards art, and in the sense of artists who are giving up on art at the account of poverty.

Stojan Knežević (1979, SI) graduated from the department of painting at the ALUO Ljubljana (2007). In the same year he received the ALUO Award for Special Artistic Accomplishments. Lives and works in Velenje and Topolšica in Slovenija. A selection of solo exhibitions: Sedmi blok, City Gallery Šoštanj, 2011; Suburbia, Plevnik – Kronkowska Gallery, Celje, 2013; Paint or Dye, Factory of Art, Majšperk, 2013. 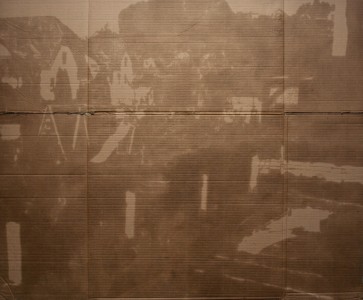