Marko Jakše’s qualitative extent is still extremely wide and he still researches figure, portrait and flora and fauna in interiors as well as in open landscapes. The artist puts diverse figuration as equal elements into mutual conflicts, dramatically and many times bloody situations on one hand and elegiac, melancholic and sometimes symbolically tranquil shades on the other hand.

He is an extremely refined observer, who lucidly perceives visual tactile values and translates them into painting material. In his mature years and with continual researching approach he is achieving a true refined painting mastery.
It is as if he uses realism as a means to deceive / convince the eye, so that the viewer starts believing in a possible existence which is later, with some break or extreme, put into the sphere of the unreal (unreal because it can not be seen). And so he opens the dusty doors of a viewer and brings him into the world that arouses fear in its greyness or dreadfulness; there he swings him into aesthetic comfort, which is the immanent quality of art.
Marko Jakše has reached refinement of old masters and even more: his paintings can not be put in just any century; Although he operates with archetypes, his paintings talk about here and now. He is completely contemporary, subversive.

Marko Jakše (1959, SI) completed his studies at the Academy of Fine Arts in Ljubljana as a self-taught artist in 1987. He has been a freelance artist since. He has exhibited his works at many solo and group exhibitions at home and abroad, and received several domestic and international prizes and awards. 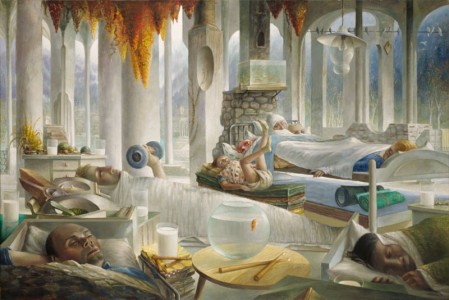