Since the turn of the second millennium, concrete social-political criticism has been part of Máriás’s art practice. He always articulates his views on human corruption and the pestilence at the high level of society. Referring to the farcical demeanour, time-serving human attitude and mendacity of politicians and members of the parliament, for example, his style becomes rather concrete and devastating. Instead of caricature-like gestures of drawing, he presents the topic through heavy, condemnatory brushstrokes on a rough, compact ground of pure, vivid colours, with its roughness suggesting the roughness of life. The artist overtly names the targets of his personalised witticism, his list of names including Hungarian prime ministers, as well as figures familiar from European or universal history (Ferenc Gyurcsány as Leonardo da Vinci; Viktor Orbán as Jesus Christ; Having waited 35 years for it, Brezhnev receives his first Trabant car, and leaves right away for a picnic in Siberia; Mao in Modigliani’s Studio; Che as a child with his marionette, etc.). Máriás no longer veils anything with shades, no longer conceals or suggests things metaphorically. This time, there is no loophole for anybody; everyone is exposed: the musician, the television anchorman, the party leader, the porn star, the journalist, along with all the other self-appointed or media-construed notables crowding his series of paintings.
(original text by Bálint Szombathy)

drMáriás (Béla Máriás, 1966, RS/HU) studied at the University of Art in Belgrade. In 1991 moved to Hungary from Yugoslavia where he resides since. His multi-disciplinal art can be featured as having strong and critical attitude that deals with existential questins deriving from East-European identity, historic and political context. His artistic language implements elements of avantgarde, dadaistic, pop art, soc art and surrealist attitude. Defines his activity and social surgery. Leader, singer, saxophone and trumpet player of the Tudósok band (The Scientists) that gave more hundreds of concerts from Russia to the United States of America. Had many solo exhibitions among other in Budapest, London, Belgrade, Vienna, Ljubljana and New York. His prose has been connected to the beat generation and the Russian avantgarde. His books have been presented in the form of multimedia events, plays, performances, concerts. His essays on art are published in the Élet és Irodalom weekly and art magazines.
http://www.drmarias.hu/ 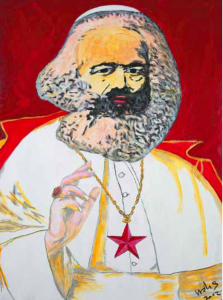