The installation is based on the 1958 drama by Max Frisch, Biedermann und die Brandstifter (The Fire Raisers). It is an epic drama in the Brechtian tradition, but also a critical reaction to the Brechtian Lehrstück, as the subtitle suggests: Lehrstück ohne Lehre: A Morality Play without a Moral.

Stummer Diener is an object and at the same time a device for a continuous performative act. The choir stands in a circle around this object and ritually repeats the selected admonitions from a book in a given order.

The title of the installation, Stummer Diener (translates to mute servant) comes from the German name for the furniture type that became popular in homes of the expanding middle class during the Biedermeier period. It is a reminder of a style, a form of life and a general mood that grew out of the wealth of the bourgeoisie during the process of Restoration under Metternich between 1815, the end of the Napoleonic war and the revolutions of 1848. The work cites Frisch, who created a timeless middle class setting, within which the fear of change, hypocrisy and short-sightedness blocks the voice of reason. The appropriated texts are quotations from the play: seven chosen admonitions of the fireman; a choir of seven that expects a disaster to happen, but only has the means to give warnings, to extinguish the fire, but not to prevent it. The only reference to a specific historical epoch that is in the title of the play, points our attention to a state of ignorance and passivity amongst the empowered segment of society that first unfolds during the Biedermeier period, a state that is continuously renewed and sustained in the cycle of revolutions and restorations until the present time.

Most Tehnica Schweiz projects work around the theme of community and collaboration. TSCH projects often rely on the participation of large groups of volunteers. All TSCH projects engage in extensive research, and occasionally archival work. Gergely László is also a founding member and representative of the Lumen Photography Foundation & Lumen Gallery (www.photolumen.hu) as well as a founding member of IMPEX – Contemporary Art. 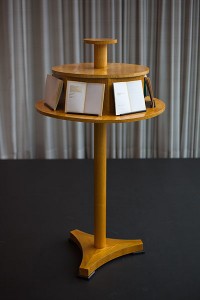