Hodošček made the video in collaboration with six members of a school debate club (Gymnasium Celje – Center). For several months the members participated in a sort of parallel curricula initiated by the artist. The departure point of the debate was the legacy and potentiality of the Non-Aligned Movement (First NAM conference in Belgrade, 1961). Pupils engaged themselves into a thought process where they reflected upon the idea of the third politics today, new forms of communism and their own role within family, institutional and social structure. The artist however was interested in the transitional moment from the act of speaking to a moment of collective being and working together. The video therefore documents a process of writing a collective poem that expresses their mutual concerns. However, the moment of being and doing things together is a complicated process, since individual voices have to be in sync with the overall interest of the group. The video exposes moments of mutual effort of creation, disagreement or points of negotiation and affirmation.

Maja Hodošček (b. 1984) works in the media of video and installation, exploring social relations in the policies of exchange and collaboration, with special emphasis on speculative modes of representation in relation to the documentary. To this end, she focuses on the concept of work as a means of self-realization, the dynamic of work and labor processes, their transformative potential, and the position of a subject in the organization and structure of labor. Most of this questions are being realized through multiple relations with highschool and elementary school pupils with whom Hodošček initiates various situations that are taking place within the school environment.

Hodošček has presented her work at solo exhibitions (e.g. In the Background, P74 Gallery, Ljubljana, 2011; Raw Material, Gregor Podnar Gallery, Ljubljana, 2010; …) and group exhibitions (Travelling Communiqué, Museum of Yugosalv History, Belgrade, 2014, U3, 7. Triennial of Contemporary Art, Museum of Contemporary Art Metelkova, Ljubljana, 2013, Three Artists Walk into a Bar, deAppel, Amsterdam, 2012, among others). In 2010 she received the OHO Award. She completed her master’s degree at the Dutch Art Institute in Arnhem, the Netherlands. In addition to her artistic practice she also works as a curator for the Center sodobnih umetnosti Celje. 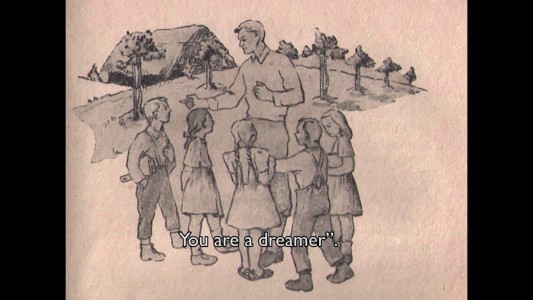