Woman reproduces for free the workforce that is quintessential in capitalism. She gives birth to, nurtures, services and loves the workforce that capital will later benefit from. Her work is degraded, artfully disguised as a labor of love, and as such it is not considered a socio-economic activity that has value, but as a natural service of women to society. A woman who performs domestic work is a force behind the entire human labor, constantly exploited for the benefit of capitalist accumulation.

Systemic attack on women is directed towards their entire being as well as their sexuality. Within the patriarchal and capitalist framework, female sexuality is reduced to passivity, receptivity, sublimation  and almost resistance to her own sexual needs. Sexuality is in the service of capitalistic objectives which consider functions of the uterus, vagina and clitoris only in the reproduction of the workforce. Within an isolated sphere of home, the woman is an object over which a man expresses dissatisfaction towards the system which exploits him, or over whom he exercises the power that he is deprived of by that very system.

Being deprived of autonomy and creativity, both in her own sexuality, and in the process of socio-economic production, women recognize and build their identity in a role of housewife. Isolated inside the house ghetto, they do not learn about their own political resources, possibilities of their use and the possibilities of social organization.

We did enough housework!

This work is inspired by Mariarosa Dalla Costa, Selma James, Silvia Federicci and the “Wages for housework ” movement.

Adela Jušić (b. 1982, Sarajevo, Bosnia & Herzegovina) graduated from the Academy of Fine Arts at the University of Sarajevo (2007). She works primarly with video art, video performances and recently also sound installations. Socially engaged and rooted in personal experiences, her artistic practice revolves around the subject of the war in Bosnia, the position of women in war, and the religion and tradition in which she grew up. Adela Jušić received the award for Best Bosnian Artist (YVAA) in 2010, which also won her a residency at the ISCP in New York. Over the past two years she has collaborated with artist Lana Čmajčanin. She is a member and co-founder of the Association for Art and Culture “Crvena”. 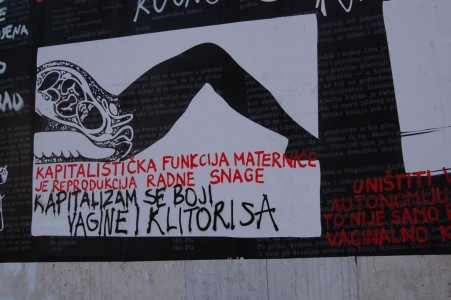