The video is based on documentary materials filmed during the events on Maidan Square in Kiev during December 2013 – February 2014. The author’s voice over comments the episodes by quoting from texts on the history of the Middle Ages (including works by Georges Duby, Ewart Oakeshott, Henry Suso and others). Thematic associations caused parallels between the development of contemporary neoliberalism in post-Soviet countries and the system of feudal monarchy in Europe, and between the aesthetics and ethics of contemporary political protest and the struggle of free medieval cities against the rustless barons.

Mykola Ridnyi was born 1985 in Kharkiv, Ukraine, where he currently lives and works. He graduated from the Kharkiv State Academy of Design and Arts. In 2005 he became co-founder and curator of the gallery-laboratory SOSka, an artist-run space for developing the local culture sphere in Kharkiv. Ridnyi was shortlisted for the PinchukArtCentre Prize 2011.
Through video, sculpture and installation, Mykola Ridnyi performs a critical reflection on the socio-political context of the post-soviet environment. His artistic statements are often constructed using a combination of documentary films with traditional figurative sculptures and found objects. 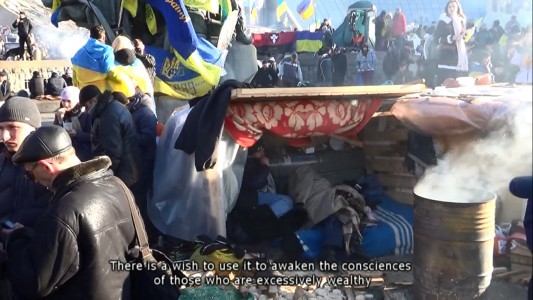