“Mare’s head, Mrs. Bulbous, Mrs. Glasscutter, Little Lemon, Rattles , Backpack, Mrs. Bleble – and another and another. They were all there almost daily. They belonged to the inventory, like the black hole of a fireplace with artificial logs, as strange suits of armour that are left over from some first republic decorations. Strobe lights and super cooled vodka, close to midnight – nowhere to move, too small, over-crowded space, air thick with smoke. Near dawn the DJ was paid fifty for each additional song. Convulsive laughter and genuine tears. Insightful conversation and superficial coquetry. One-night stands and love for life. Beautiful young men and beautiful young women. Effeminate “B´s“ and respectable – looking gentlemen, who rebounded from their families. Female footballers, waiters, taxi drivers and most probably the secret police too. Drugstore assistants, a postman and a train conductor. The girls from Yalta used to end their night work here. They all belonged here – belonged to a kind of pseudo-family, to the community of one Prague gay club, which was one of the two. Ivan bounces the rubberneckers. I could never really shoot the real „documentary“. There were many of those who wished to preserve their „everyday“identity, and they would not like to be associated with T Club. So we are getting to know T – club as a place of „eternal carnival“.” (Libuše Jarcovjáková)

Libuše Jarcováková (b. 1952) graduated from the School of Graphic Arts and then made ​​several unsuccessful attempts to enter the Film and Television Faculty of the Academy of Performing Arts in Prague. For four years she worked at the gravure printer in Prague’s Smichov, where she created her first substantial documentary. In the late 1970’s she left for a creative stay in Japan, and later returned there twice. In her work, she documented the Romani and Vietnamese communities in former Czechoslovakia and focused on the life of a homosexual minority group in one of Prague night clubs, the T-Club. She now teaches photography at the School of Graphic Design in Prague. 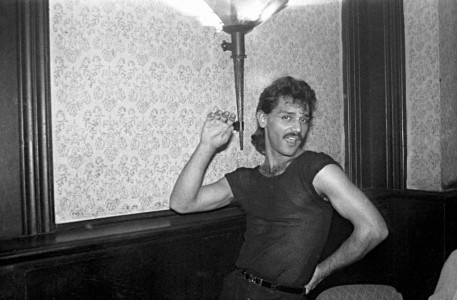